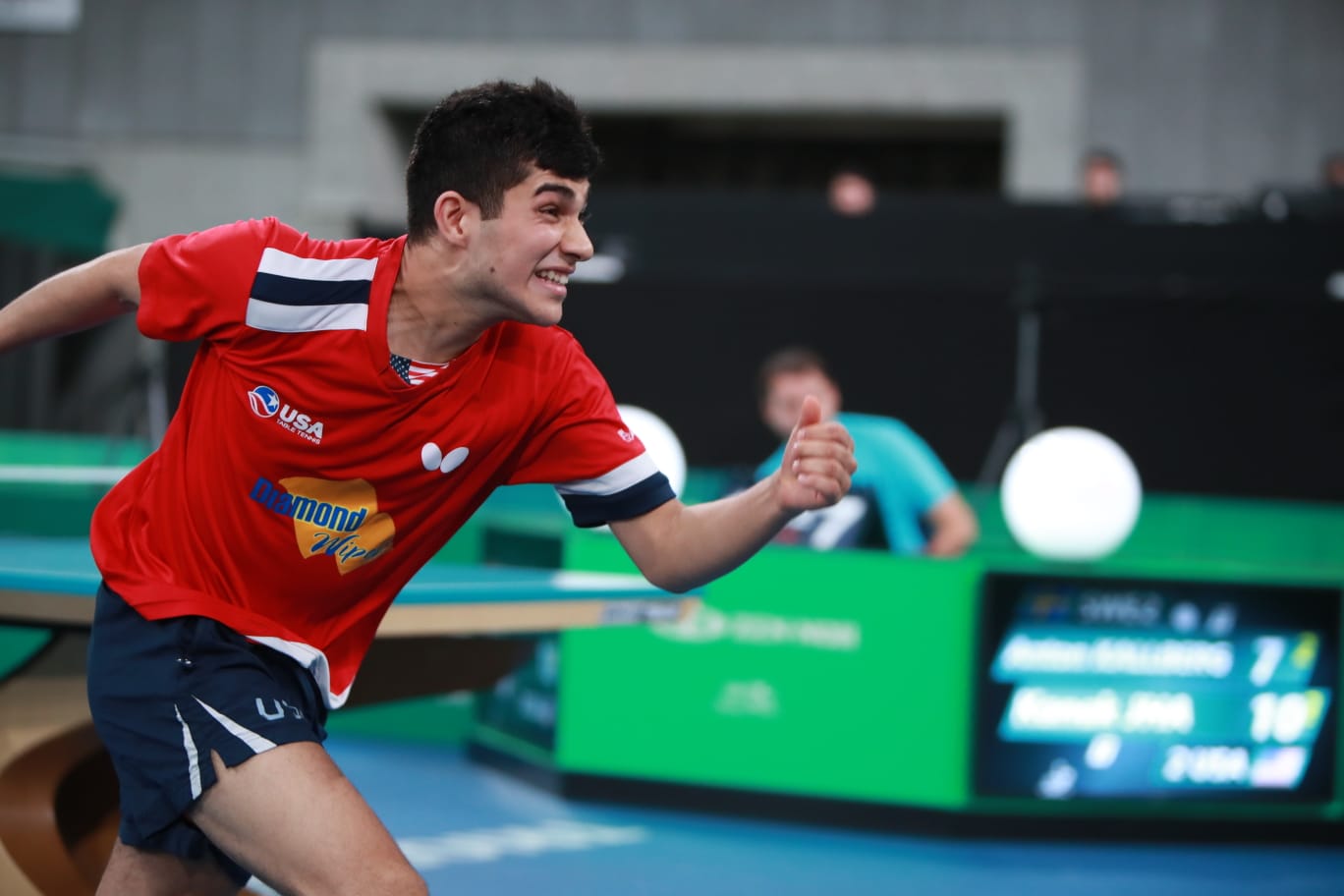 There's nothing like a little pressure to motivate you. Playing at the ZEN-NOH 2019 ITTF Team World Cup, the USA women's and men's teams each faced their moment of truth. The women, seeded seventh, found themselves in a qualification group with Japan (#2) and Austria (#9). After Japan made quick work of both its opponents, assuring its advancement, the USA and Austria were left to battle for the last ticket to the dance. The USA proceeded to justify its superior seeding with a 3-1 win over Austria. Amy Wang sealed the deal with a win over Karoline Mischek, (11-4, 3-11, 12-10, 11-9). For their efforts, the American women have earned a quarterfinal matchup with top seeds China. While the women made it look easy, the gentlemen from the States were much more prone to dramatics. With their backs similarly to the wall after a drubbing by the Republic of Korea, the 11th-seeded USA men needed to beat fifth-seeded Sweden to advance. It could hardly have started any better... for Sweden, that is, in the doubles contest that initiates Team World Cup matchups. The Scandinavian tandem of Anton Kallberg and Elias Ranefur barely broke a sweat in a 3-0 win over Yijun Feng and Kai Zhang. This put immense pressure on American ace Kanak Jha, as he faced off with Kristian Karlsson, one spot ahead of Jha in the world rankings at #25. Undaunted by his opponent's superior ranking, Jha won 3-1. With matters squared up, the pivotal third match saw the USA's Kai Zhang (world #213) sqare off against Elias Ranefur (#163). Again, the American was unintimidated by his opponent's higher ranking, with Zhang also winning in four games. "Before my singles match against Elias Ranefur, my teammate Kanak Jha advised me on how to play against him," reported Zhang after the match. "I am happy things worked out the way it went." Thus, the pressure was now on Sweden's Kristian Karlsson to not only keep his team alive, but also avoid a colossal upset to Yijun Feng (world #746). He did, surrendering just 12 points over three merciless games to notch the equalizer. To the delight of the Japanese spectators, this epic battle was going the distance. The final match would pit Kanak Jha against Sweden's last hope, Anton Kallberg (world #70). For a match with so much riding on it, it surely did not fail to entertain. Jha won the first game, 11-8. Kallberg replicated the feat in the second. The crucial third game would go the America, 11-9. Cornered, Kallberg responded admirably, staving off elimination in the fourth, 13-11. It would all come down to the fifth game in the fifth match. Jha summoned all of his experience from the Olympics, World Championships, Pan Am Games, European leagues and numerous other high-pressure international matches to secure the win, 11-7. "I cannot tell you how I feel with this big win over Sweden," said an elated Jha afterward. "This has again shown that United States is now on the world map of table tennis. We just have to believe in ourselves and I must also commend my teammates for their efforts." His teammates reciprocated the praise. "We are so excited with this victory and I must commend my teammate Kanak Jha for lifting our spirit even when we lost the doubles match," said Yijun Feng. Like their countrywomen, the USA men earned a quarterfinal berth with top-seeded China. With both the men's and the women's teams already having secured spots in the Olympics at last month's team trials in Rockford, Illinois, this trip to Tokyo offers invaluable practice. "This is a good feeling for me, particularly playing at the same venue that will host the Tokyo 2020 Olympic Games," Feng continued. Certainly, today's performances bode well for next summer. In the meantime, they have the chance to pull off even more stunning feats against seemingly indomitable China. No pressure.